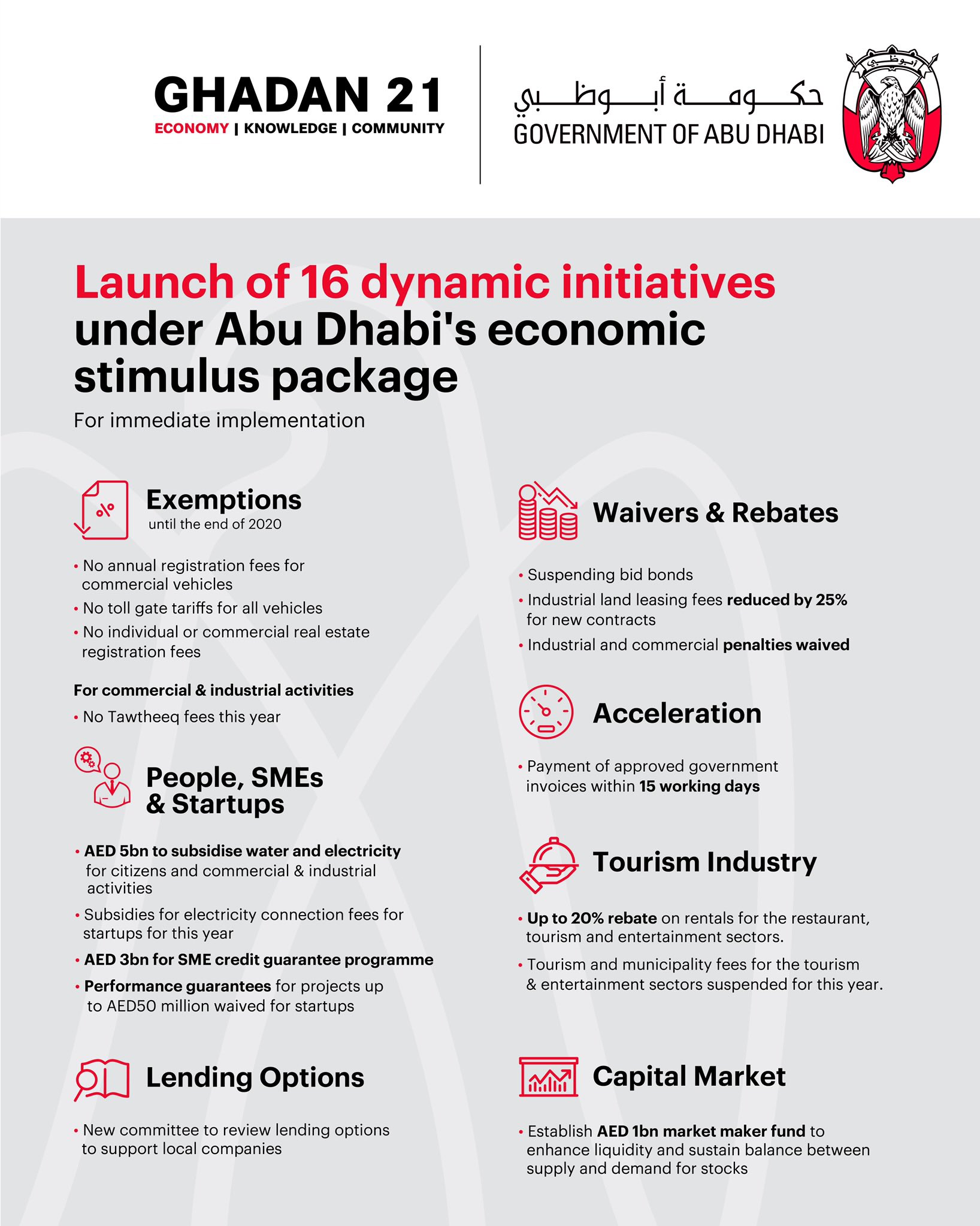 His Highness Sheikh Mohamed affirmed that the newly launched stimulus package in Abu Dhabi and those launched recently by the UAE Central Bank and local governments provide a solid foundation to accelerate and advance the economy, as well as protect the UAE's economic stability.

His Highness Sheikh Mohamed gave directives to continue with all approved capital expenditure and development projects in the Emirate, as well as further measures to preserve Abu Dhabi’s economic gains, prioritising startups and SMEs.

His Highness Sheikh Mohamed also gave additional directives to formulate plans to stimulate strategic investment sectors, and to form a new committee headed by the Department of Finance, with members from the Department of Economic Development and local banks to review lending options to support local companies.

His Highness Sheikh Mohamed affirmed that the authorities will continue developing investment laws and regulations and ensuring their flexibility to maintain Abu Dhabi’s progressive economic development. Sheikh Mohamed expressed his confidence in the resilience of the national economy and its ability to navigate market fluctuations.

Meanwhile, H.H. Sheikh Khalid bin Mohamed bin Zayed Al Nahyan, Member of the Abu Dhabi Executive Council and Chairman of the Abu Dhabi Executive Office, reaffirmed that the new initiatives under the directives of His Highness Sheikh Mohamed bin Zayed would preserve Abu Dhabi’s economic gains and support its private sector, noting that these directives are in line with Sheikh Mohamed’s robust economic vision and his steady guidance.

The measures announced by the Abu Dhabi Executive Council include an allocation of AED 5 billion for water and electricity subsidies for citizens and the commercial and industrial sectors, intended to reduce the cost of living and support businesses, as well as subsidising electricity connection fees for startups until the end of the year.

For SMEs, an additional AED 3 billion has been allocated to the SME Credit Guarantee Scheme managed by Abu Dhabi Investment Office, ADIO, to stimulate the ability of SMEs to navigate the current market environment. As for the financial markets, the Executive Council has allocated AED 1 billion to establish a market maker fund, to enhance liquidity and sustain balance between supply and demand for stocks.

Other initiatives announced today include exemption of all commercial and industrial activities from Tawtheeq fees, as well as exempting individual and commercial real estate registration fees for this year, suspension of bid bonds, and exempting startups of performance guarantees for projects up to AED 50 million.

The initiatives additionally include settling all approved government payables and invoices within 15 working days, waiving all current commercial and industrial penalties, and reducing industrial land leasing fees by 25 percent for new contracts.

The new committee established under the direction of H.H. Sheikh Mohamed and headed by the Department of Finance and including members of the Department of Economic Development and local banks, is tasked with reviewing lending options to support local companies. All measures and initiatives will take effect immediately.