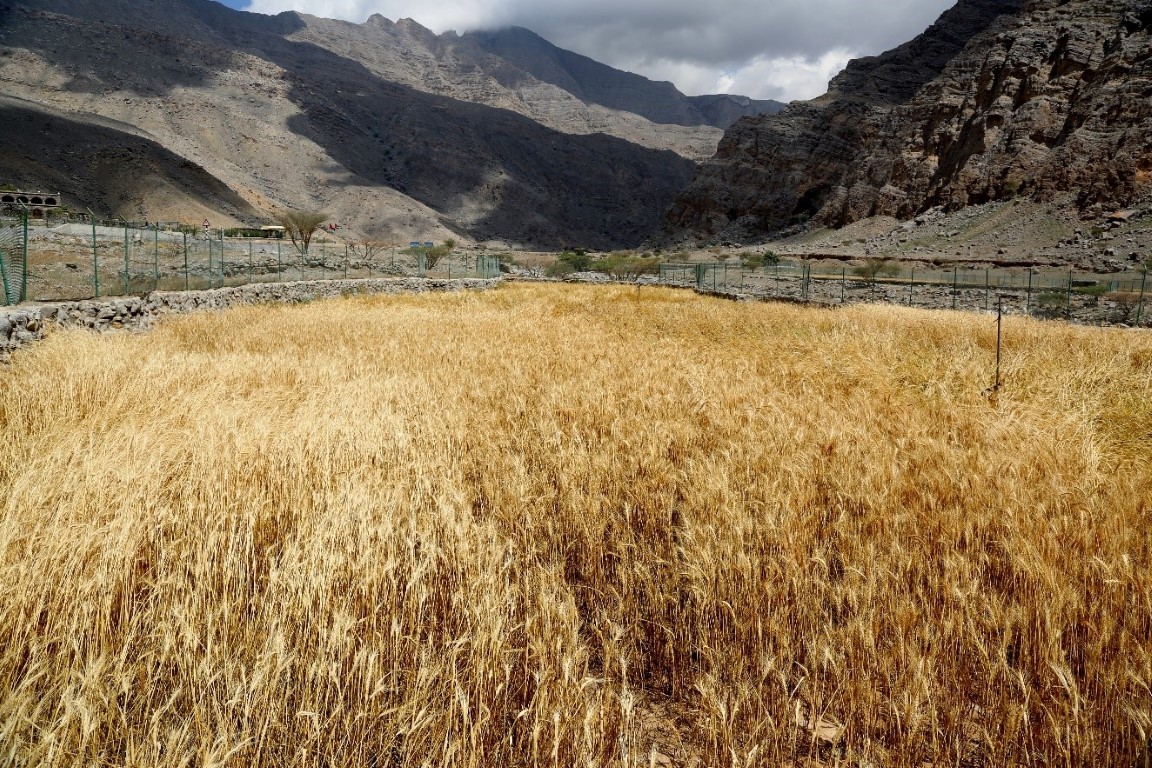 ABU DHABI, 4th April, 2020 (WAM) – Types of wheat and barley being grown in the mountains of Ras Al Khaimah may date back for hundreds or even thousands of years, according to a recently-published study.

The study, by Dr. Mohammad Shahid, of the Dubai-based International Centre for Biosaline Agriculture, ICBA, is published in the latest issue of the annual journal Tribulus, produced by the Emirates Natural History Group in association with the Environment Agency – Abu Dhabi, EAD.

Dr. Shahid studied crops grown in farms in three mountain valleys in Ras Al Khaimah, Wadi Bih, Wadi Ghalilah and Wadi Sha’am. Visiting the farms over a four year period, Dr. Shahid first collected data on the planting of wheat and barley and then collected seeds once the crops had matured.

Some of the seeds were then planted at the ICBA, to allow for further study, with samples being preserved in the ICBA genebank.

Shahid identified three different ‘landraces’ of wheat and one ‘landrace’ of barley during his studies.

A crop landrace is a domesticated population of a plant species that has an ancient origin, a separate identity and no history of deliberate cross-breeding to refine it.

A preliminary study of the three wheat landraces indicates that they are mixtures of at least two species, Triticum aestivum, also known as bread wheat, and Triticum durum. The barley is of a type known as 2-row barley, Hordeum distichon.

Bread wheat is known to have been present at the archaeological site of Tell Abraq, on the border between Sharjah and Umm al-Qaiwain as far back as the Umm an-Nar period, over 4,000 years ago.

The presence of bread wheat, together with Triticum durum and 2-row barley, is also recorded from the archaeological site of Kush, in Ras Al Khaimah. It is located close to the entrance to the Wadi Bih, where the wheat landraces are still cultivated today. The site was occupied from the first centuries of the Christian era up until around the 13th century AD.

Traditional local farmers, Shahid reported, do not buy seed every year from the local market. Instead, they save some seed of the wheat and barley landraces after the harvest and plant them for the next cultivation season. "This practice has been passed from generation to generation in the area," he writes in his study. "It cannot, however, be determined whether the same landraces are being cultivated that would have been used in the distant past."

Most farmers, he noted, only sow seed if there are good rains during the month of November. If they are absent, the fields are left unplanted. Locally-grown wheat, he reported, is used to make traditional food like Harees, Khabees and bread, although wheat plants before they mature are sometimes used for animal feed. The barley grown is mainly used for animal feed, although some is also added to local food dishes.

"It is suggested," Shahid says, "that the sowing of local wheat and barley landraces may represent a link to the agricultural practices of the past."

With the adaptation of the landraces to the local environment, it is important that they are conserved, he says, adding "they are a rich source of genetic biodiversity, important for local traditional agriculture as well as for research."