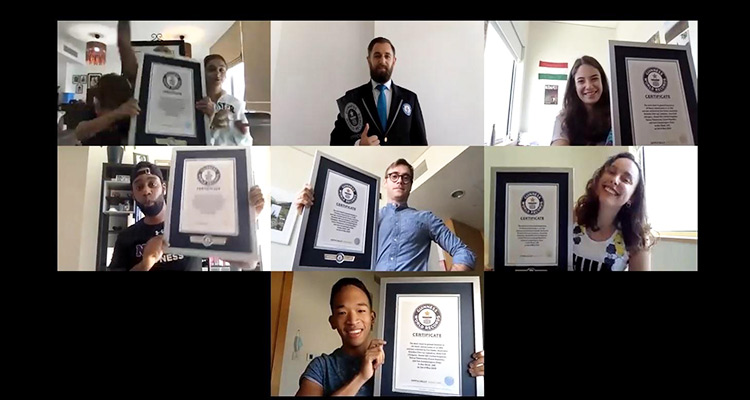 ABU DHABI, 1st June, 2020 (WAM) -- A group of six athletes based in Abu Dhabi smashed the Guinness World Records, GWR, title for most chest to ground burpees in 24 hours.

"While the minimum required was 6,000, the team managed to double that with 12,502 burpees in the same allocated time", GWR said in a statement on Sunday.

Joined by two witnesses a time throughout their Official Attempt, the team received encouraging messages on a live conference call. "For us, the pandemic is no time for her to turn into a couch-potato. Instead, the team challenged each other to double down on their efforts - even if our gym sessions are on-hold and we are separated from our teammates," said Daniel Gill.

Twelve certificates in total sit on Eva Clarke's wall today. Clarke said, "I managed to set 15 Guinness World Records titles in the past, three of them have already been broken. It is delightful to see other women pushing their limits in the same category. The thing that I try to preach and practice each day is to encourage women to explore their potential."

As this period of training is different but nonetheless valuable, the team was trying to make the most of unusual circumstances. "Coming face-to-face with physical challenges never seems to deter me - with every problem encountered, I take on each adversity with a determined mind set and a will to succeed," said Ivan Camponogara, who is also a specialised researcher in finding new ways to help sensory and motor impaired people.

GWR said it is now rolling out online Remote Adjudication for both individuals and brands. The service was launched in response to the recent outbreak. Shaddy Gaad, Senior Marketing Manager at GWR’s MENA Office said, "We congratulate the team on their achievement during lockdown. Like we did, they adapted quickly to our newly launched Remote Adjudication service, where we received their application, adjudicated it online, and presented them with the certificate in a chain video. Our job is to inspire and encourage brands and individuals to celebrate their achievements wherever they are."

"Mind and body are linked together. There is no time for mopping around, as all it takes is just one decision to change your attitude 180 degrees. Once that decision is taken, normal will be different. It will not be the same normal, but it can be a better normal," added Anna Erdi, who also celebrated graduation with a Psychology degree.

Clarke has just added another world record to her total of 12 including most pull ups in one hour (female), 12 hours, and 24 hours equivalent. She also holds the titles for most knuckle push ups in one minute (female), one hour, and 24 hours equivalent, as well as most burpees in 24 hours (female), and 12 hours, most chest to ground push up burpees in 24 hours (female), and one minute. In addition to the fastest marathon carrying a 40 lb backpack (female) set during the Virgin Money London Marathon in London in 2015.

The attempt aimed at encouraging individuals to stay fit while at home and inspire more people to achieve bigger dreams despite the lockdown.