Sustainable agriculture is an economic and social necessity for our country, says Mohammed bin Rashid 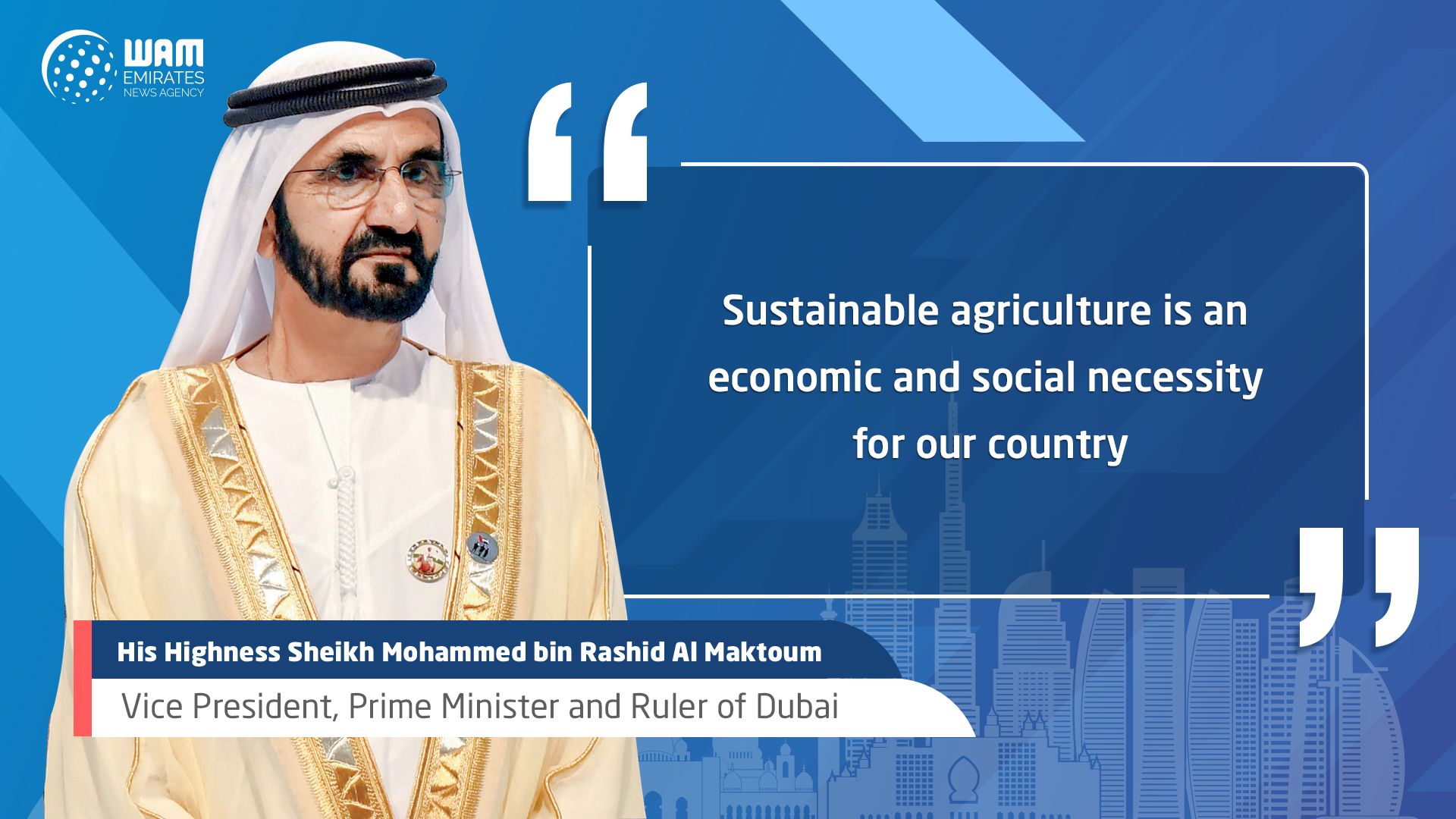 DUBAI, 28th June, 2020 (WAM) -- His Highness Sheikh Mohammed bin Rashid Al Maktoum, Vice President and Prime Minister of the UAE and Ruler of Dubai, has underlined the importance of food security as a key element of comprehensive development and highlighted UAE’s keenness to formulate plans and policies aimed at facilitating sustainable food production by utilising the latest in technology and innovative approaches.

His Highness Sheikh Mohammed said that the founding father, Sheikh Zayed bin Sultan Al Nahyan, realized the importance of this sector at an early stage and began to implement agricultural development plans, "We have learned from Sheikh Zayed, the founding father of the UAE, the importance of agriculture to sustaining civilization. In Zayed’s footsteps we follow, marching ahead to create a better future for our country."

Sheikh Mohammed bin Rashid remarks came while chairing the remote Cabinet meeting, held today, where a number of decisions were approved, including the "UAE Sustainable Agriculture System" aimed at increasing self-sufficiency in crops, increasing returns and investments in the sector.

The UAE Sustainable Agriculture System, the first of its kind, aims to increase UAE’s self-sufficiency from agricultural production and increase the workforce in the agricultural sector.

The new System also seeks to invest in agriculture by utilising modern technologies, and make proactive changes in food and agricultural systems.

Gaining a competitive advantage and adopting the right marketing are key elements to the System to motivate consumers to buy sustainable products, which will contribute to the development in the supply chain.

The UAE Sustainable Agriculture System has benefited from the joint programme that was undertaken between the Future Food Security Office and the Government Accelerators to develop solutions that guarantees more competitiveness of local food production, and to provide support channels for those involved in this sector.

The System utilises artificial intelligence and blockchain technologies. Smart phone applications will be used to help farmers to monitor insect’s movement. Other tools are also used to damage the fertility of insects.

The Cabinet has also approved the updated safety standardisation requirements for school buses in the UAE. The new update takes advantage of advanced technologies to boost safety levels.

The cabinet also approved the establishment of a permanent mission at the International Maritime Organisation in the UK, as well as conditions for controlling cash, securities and commercial instruments applicable to foreign direct investments.

The UAE Cabinet has designated Wizz Air Abu Dhabi as a national carrier, a move that will complement the national aviation sector.