Hope Probe: A journey of will, achievements for UAE’s youth 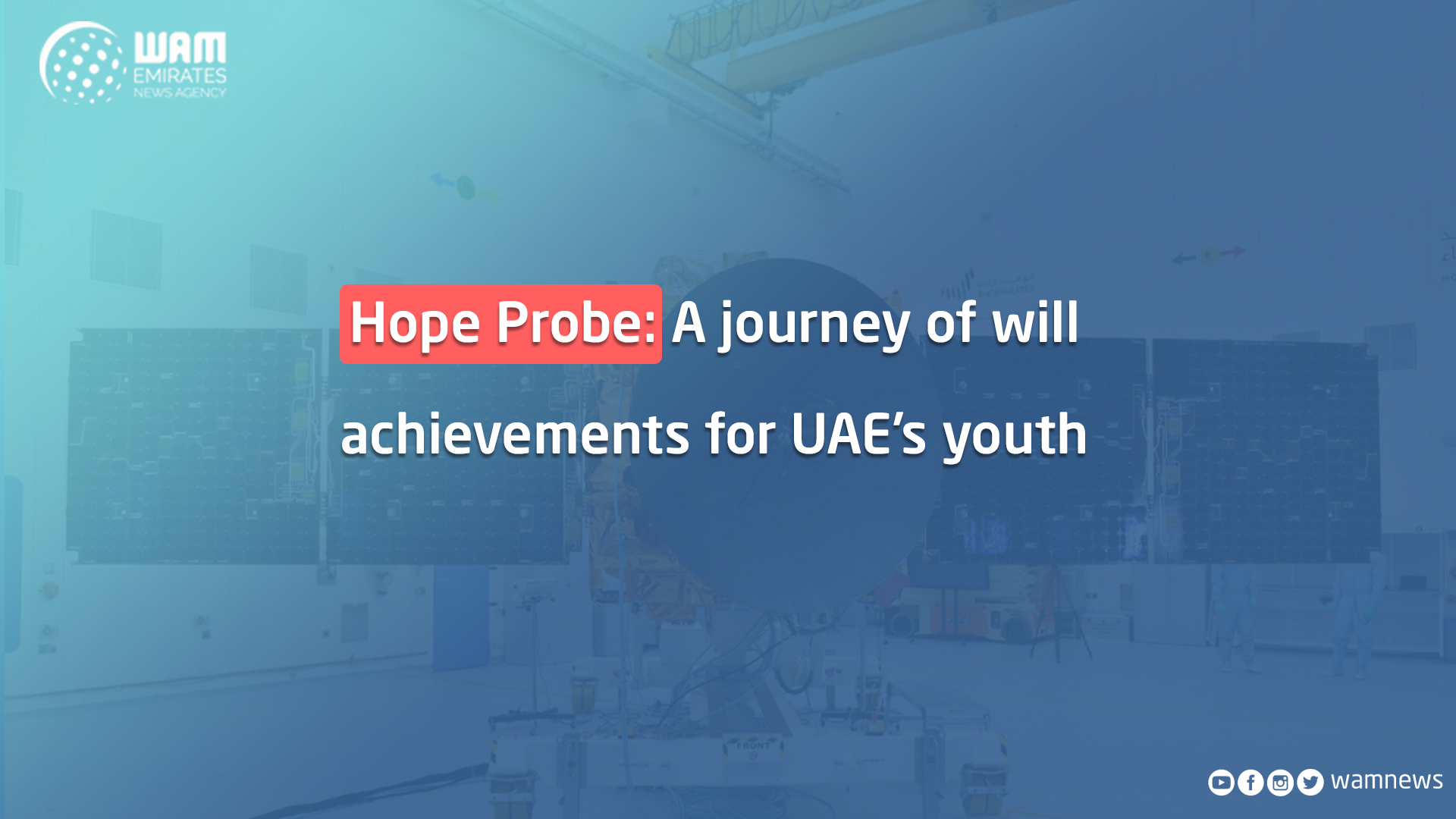 ABU DHABI, 6th July, 2020 (WAM) -- The UAE is moving forward towards accomplishing more global achievements in the field of space, as the Emirates Mars Mission, "Hope Probe," will launch in nine days.

The Hope Probe, the first Arab project aims to explore other planets, is a message of hope to all peoples of the region to revive the rich history of Arab and Islamic scientific achievements. It also reflects the UAE’s ambitious and ongoing efforts to defy the impossible.

The probe’s launch team members, currently in Japan, held a media interview remotely via video conferencing, where they expressed their pride at participating in the pioneering project.

Suhail Al Dhafari Al Muhairi, Deputy Project Manager of the Probe Development Team, said that more than 30 Emirati engineers from various specialisations participated in the development process, and Emirati team members performed a leading role in the design and manufacturing process, by producing and installing around 60 mechanical pieces.

Omar Alshehhi, Emirates Mars Mission Integration and Testing Lead, explained his role as part of the project team, stating that at the start of the project, he designed the electric and mechanical land equipment used in the probe, and tested scientific devices and conducted other tests simulating the space environment.

Mahmoud Al Awadhi, Mechanical Systems Engineer, said that he was in charge of designing the external structure of the probe, after receiving the requirements for the scientific equipment and rocket, adding that his work included supplying the probe with fuel, which is a six-hour process, and noting that he performed many tests to make sure there were no leaks.

Ahmed Al Yammahi, Mechanical Systems Manufacture Unit Engineer, expressed his pride at being present with the team in Japan and pointed out that his job is to support mechanical operations and the safe transfer of the probe from the UAE to Japan.

Essa Al Mehairi, who is responsible for the probe’s electrical systems said that he joined the project in 2015 and was entrusted with estimating the size of solar panels needed to charge the probe’s battery, noting that he performed tests to verify the safety of panels and assessed all energy systems to test their performance.

Mohammed Al Amri, Mechanical Engineer, explained that he designed the probe’s land support mechanical equipment and participated in designing the scientific equipment, mechanical support equipment and other equipment that aids integration, as well as miscellaneous electronic devices used by the probe.

He added that he participated in environmental tests and solar panel tests to ascertain the probe’s ability to perform safely in space.

In his statement to the Emirates News Agency, WAM, Al Ahbabi said, "Our youth has proved that they are worthy of representing the UAE and reached a stature that many people can only dream of, reinforcing the position of the UAE that has become a model to follow in science, knowledge, innovation and sustainability."

The UAE is determined to achieve its space-related ambitions and is a few days away from the launch of the Hope Probe to the Red Planet.