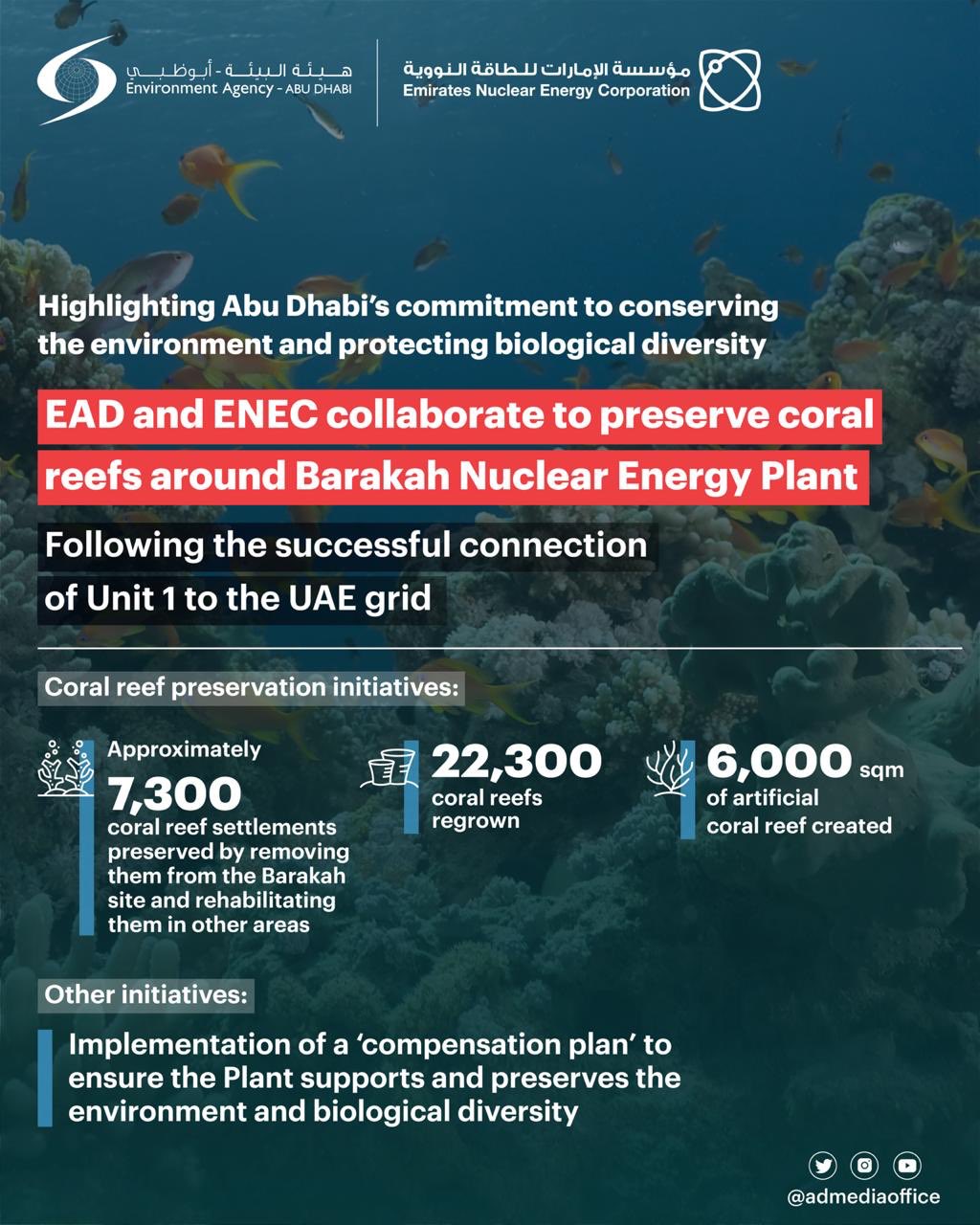 ABU DHABI, 9th September, 2020 (WAM) -- The Environment Agency – Abu Dhabi, EAD, has confirmed its continued cooperation with the Emirates Nuclear Energy Corporation, ENEC, to ensure the preservation of the environment and biological diversity in the emirate of Abu Dhabi, after Unit 1 of the Barakah Nuclear Energy Plant has been safely and successfully connected to the UAE transmission grid.

The Barakah Nuclear Energy Plant, the first operating nuclear energy plant in the Arab world, has four units, which when fully operational will generate up to 25 percent of the UAE’s electricity, while preventing the release of 21 million tonnes of carbon emissions per annum which is equal to removing 3.2 million cars off the roads each year.

As part of the collaborative efforts between EAD and ENEC, both entities have invested significant time and resources into identifying initiatives to protect the natural coastal environment surrounding the Barakah plant. As a result, a coral reef preservation project has been successfully implemented.

Around 7,300 coral reef settlements were successfully rehomed, conserving marine life, while 22,300 coral reefs have been regrown in a location 17 kilometres north of the Barakah plant. In addition, 6,000 square metres of an artificial coral reef were also completed.

Mohamed Ibrahim Al Hammadi, CEO of ENEC, said, "Since the construction of the Barakah Nuclear Energy Plant commenced in 2012, we have been keen to protect the environment surrounding the plant by adopting best practices for our environmental protection standards, applying international measures to preserve natural habitats, and conserve energy and water resources. These actions will help to ensure that the operation of our plant meets the highest environmental sustainability standards throughout the development and operation of the plant."

"This work is derived from the framework of the Environment and Sustainability Charter of the Barakah plant site, which was signed by ENEC alongside its prime contractor and Joint Venture partner, the Korea Electric Power Corporation," Al Hammadi added.

Dr. Shaikha Salem Al Dhaheri, Secretary-General of EAD, said, "This achievement is a culmination of twelve years of co-operation and intensive work between our organisations. It is also a result of the concerted efforts made by EAD and various Abu Dhabi-based government organisations and federal authorities to achieve the vision of the UAE Government and leadership."

She added, "The agency has completed the process of strategic assessment and environmental studies required to see the project bloom and achieve the desired goal. This was done to achieve the vision of the late Sheikh Zayed in preserving our environmental heritage."

Al Dhaheri also said that since EAD received the request from ENEC in 2009 to issue the Nuclear Construction Environmental Permit to establish the first Arab project for electricity generation from nuclear energy, the agency undertook a comprehensive Strategic Environmental Assessment, which she stressed on, as the extensive research conducted identified potential impacts on the environment and biological diversity.

Shaikha Ahmed Al Hosani, Executive Director of the Environmental Quality Sector at EAD, clarified that to maintain the quality of the marine environment, an assessment was carried out to measure any potential environmental impact, as well as a non-nuclear assessment and environmental conditions index to evaluate the construction plans.

She said that plans to maintain the quality of air along the paths of the 400 kV electrical transmission lines, which will be used to transmit electricity, were also evaluated. This was particularly important for the Barqa Al Suqoor and Baynounah Protected Areas.

A total of 36 quarterly environmental monitoring reports were also studied to analyse the quality of seawater, marine plankton, marine soil, air quality and the existing status of wildlife in the project area.

After the review and inspection phase concluded, EAD was assured that the project is proceeding transparently, in full compliance with local, federal and global environmental laws.