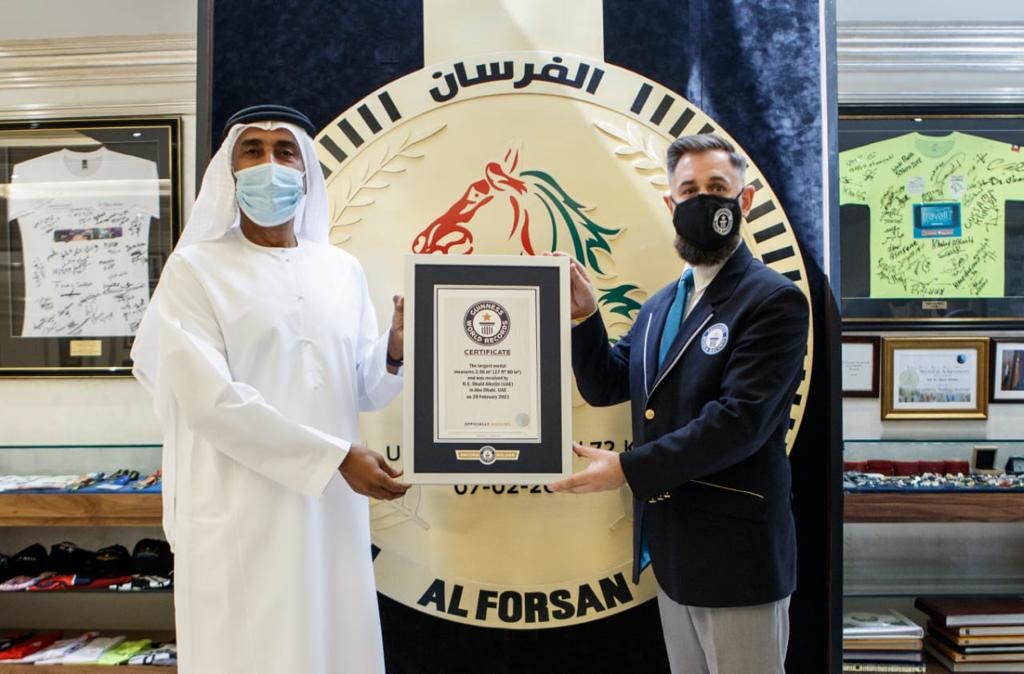 ABU DHABI, 6th March, 2021 (WAM) -- The United Arab Emirates has entered the Guinness Book of Records for presenting the largest sports medal in the world. This achievement, however, is much more than what meets the eye. This medal bears the emblem of an initiative known as ‘Al Forsan’. This initiative is consistent and representative of a history-rich legacy, that revolves around the spirited sense of entrepreneurship, through the dynamic notion of positive citizenship.

The medals’ dimensions are indeed reflective of this sentiment. Its approximate weight is 68.5 kilograms and has a surface diameter of 2.56 sqm.

To further gauge its size, the medal is also160 centimetres in length and width, and has an additional depth of 7.4 centimeters.

Prudent care was adopted during the medal’s manufacturing phase. Guidelines, laws and requirements set by the Guinness book of records committee were upheld. These regulations included the use of highly specific raw materials, including a stainless steel coating topped off with pure gold. This was then embellished with an intricate engraving of the ‘Al Forsan’ emblem and was then further decorated with a 4-meter ribbon.

The legacy of this initiative embodies the surge of interest in sports and challenging physical activities in the country, whose foundations were laid by the late Sheikh Zayed Bin Sultan Al Nahyan. To support and gauge this, it was overseen to construct world-class sports facilities that aided citizens in qualifying on all fronts of the sporting world. Additionally, several initiatives promoting humanitarian and charitable practices were put in place and had an outreach to the country’s youth through the positive reinforcement that physical activities instill within.

Dr. Obaid Al Ketbi is the visionary behind the ‘Al Forsan’ initiative and has voiced his patriotic pride for securing this sporting accomplishment through attaining a place within the Guinness World Records. He considers this achievement a vital indication of the capabilities and potential of the notion of ‘positive citizenship’ and how it empowers the people to be the best version of themselves.

Furthermore, the initiative aims to efficiently stimulate individual efforts in acquiring and innovating distinctive concepts. It also supports them on the front in acquiring international recognition, following their successful registration with the Guinness Book of Records, as part of the country’s ongoing efforts to utilise and enhance their citizens’ potentials.

‘Al Forsan’ also strengthened the adamant march towards a better life through sports for both youth and senior citizens alike - especially following numerous leaps and victories within the international sporting community.