Notebooks of the Bookseller wins 2021 International Prize for Arabic Fiction 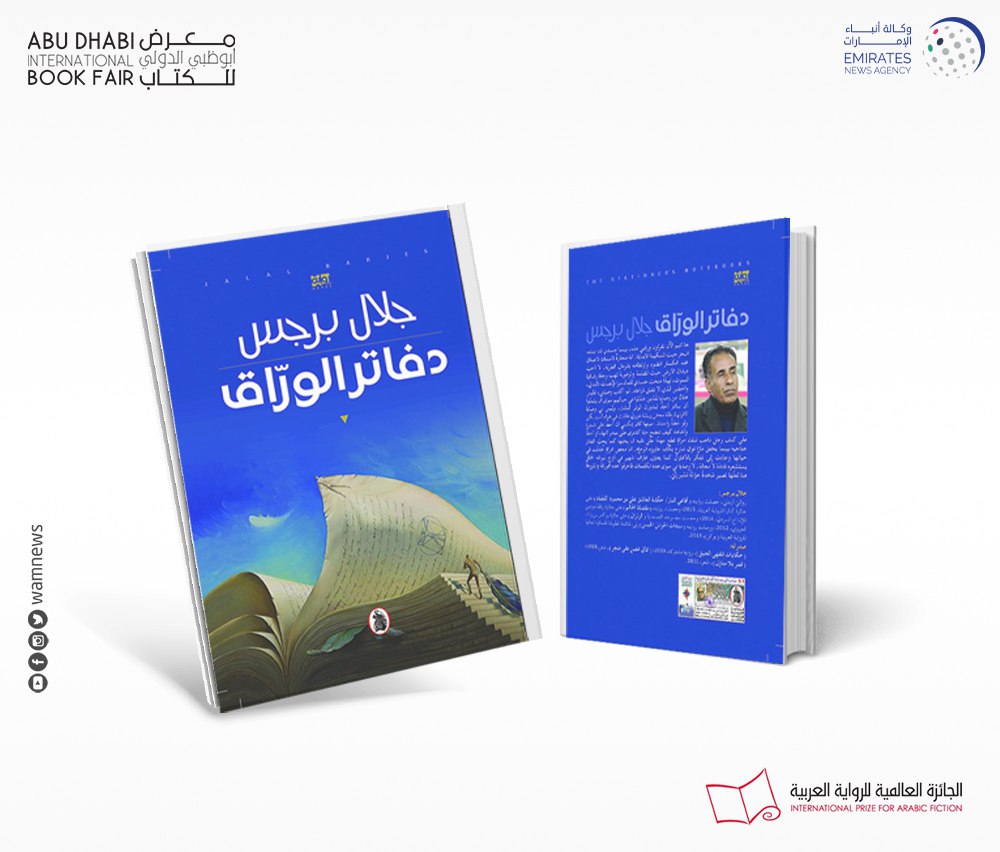 ABU DHABI, 25th May, 2021 (WAM) -- Notebooks of the Bookseller by Jalal Barjas was today announced as the winner of the International Prize for Arabic Fiction (IPAF). The novel, published by The Arabic Institute for Research and Publishing, was named as this year’s winner by Chair of Judges Chawki Bazih during a virtual winner ceremony.

In addition to being awarded USD $50,000, funding will be provided for the English translation of Notebooks of the Bookseller, and Barjas can expect to see an increase in book sales and international recognition.

Chawki Bazih, Chair of the 2020 IPAF Judging Panel, said:"Apart from its rich, refined language and tight, thrilling plot, this bold winning novel is distinguished by Jalal Barjas’ impressive ability to strip the masks from the face of tragic reality. The author presents us with the darkest portraits of homelessness and poverty, where meaning has been lost and hope torn up by the roots, turning life into a realm of nightmares. Despite this, the novel does not call for despair. Rather, through it, the author is saying that reaching the depths of pain is a necessary condition for finding new dreams and standing up once more with hope on firmer ground."

Professor Yasir Suleiman CBE, Chair of the IPAF Board of Trustees, said: "Evoking times of unprecedented change, incipient corruption and simmering turmoil hissing away in the background, Notebooks of the Bookseller reflects on the lives of those who have been left behind in an alienating and expanding city landscape, mercilessly displacing the intimacy of olden times and the obligations of time-honoured norms. The crisscrossing tales in the novel mark multiple descents into unforgiving despair. Sometimes pacy, but often slow and rich in detail, the novel paints a gripping picture of social and psychological fracture writ large."

Set in Jordan and Moscow between 1947 and 2019, Notebooks of the Bookseller tells the story of Ibrahim, a bookseller and voracious reader, who loses his shop and finds himself on the street. Experiencing schizophrenia, he assumes the identities of the protagonists of the novels he loved, to commit a series of crimes of burglary, theft and murder. He attempts suicide, before meeting the woman who will change his life. This story and others are told through a series of notebooks and multiple narrators whose paths sometimes collide. It is the painful, fragmented tale of marginalised people who are ignored or invisible to others, while a corrupt ruling class thrives. Against this background, the importance of the house is highlighted, as a symbol of the homeland. Barjas’s novel audaciously tackles a difficult reality not just in Jordan but the Arab world as a whole.

Barjas is a Jordanian poet and novelist, born in 1970. He works in the field of aeronautical engineering. For many years, he wrote articles for Jordanian newspapers and headed several cultural organisations. He is currently head of the Jordanian Narrative Laboratory and presents a radio programme called "House of the Novel". His published work includes two poetry collections, short stories, travel literature and novels. His short story The Earthquakes (2012) was winner of the Jordanian Rukus ibn Zaʼid ʻUzayzi Prize. His novel Guillotine of the Dreamer (2013) won the Jordanian Rifqa Doudin Prize for Narrative Creativity in 2014, and Snakes of Hell won the 2015 Katara Prize for the Arabic Novel, in the unpublished novel category, and was published by Katara in 2016. His third novel Women of the Five Senses (2017) was IPAF-longlisted in 2019.

Notebooks of the Bookseller was chosen by the IPAF judges as the best work of fiction published in Arabic between 1 July 2019 and 31 August 2020 from a shortlist of six novels by authors from Algeria, Iraq, Jordan, Morocco and Tunisia. The shortlisted finalists Abdulatif Ould Abdullah, Amira Ghenim, Dunya Mikhail, Jalal Barjas, Habib Selmi and Abdelmajid Sebbata will each receive USD $10,000.

The International Prize for Arabic Fiction is an annual literary prize for novels in Arabic. It is currently sponsored by the Abu Dhabi Arabic Language Centre, at the Department of Culture and Tourism – Abu Dhabi, and has been mentored by the Booker Prize Foundation in London.