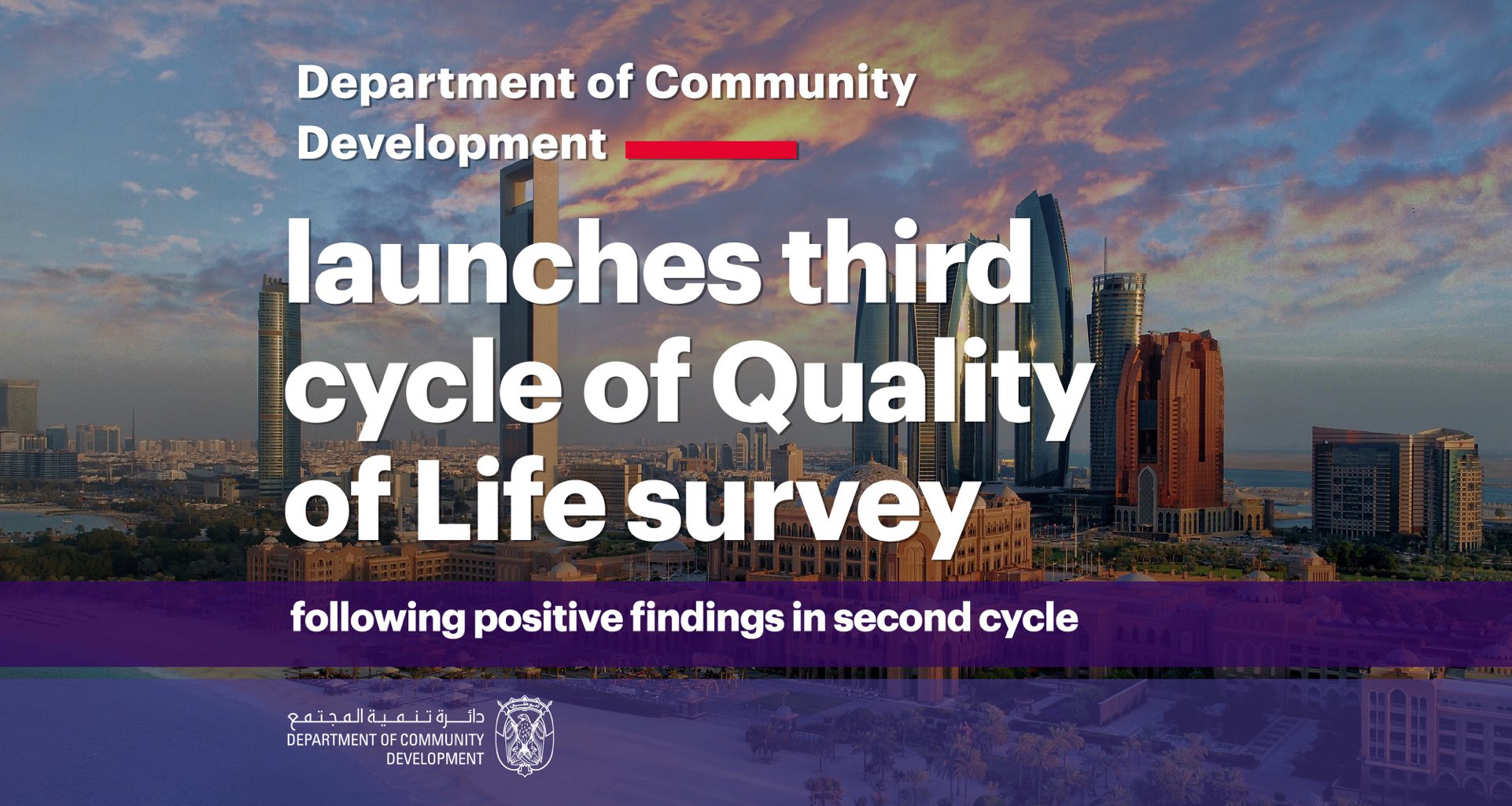 ABU DHABI, 14th June, 2021 (WAM) -- The Department of Community Development (DCD) in Abu Dhabi launched the third cycle of the "Quality of Life" survey, a key measurement tool for the development of the societal and governmental sectors’ operational systems in the Emirate. All citizens and residents are expected to participate in the survey, in order to capture their views, needs and aspirations and assess their quality of life and well-being, in addition to designing and developing strategies and policies that can benefit the whole society.

The survey is aimed at examining the welfare indicators that measure societal levels in the Emirate with the purpose of detecting major societal issues, as well as measuring the community's awareness of some of these issues. The Quality of Life Survey is a comprehensive, descriptive study based on descriptive methods that entail electronically designed questions to guarantee accessibility for the biggest possible part of society, whether individuals or families.

In this new cycle, the survey contains 14 key modules that were based on the findings of the first and second cycles: Housing, Household Income and Wealth, Job and Earnings, Work-life Balance, Health, Education and Skills, Personal Safety and Security, Social Connections, Civic Engagement and Governance, Environmental Quality, Social Cohesion and Culture, Social and Community Services, Digital Well-being, and Subject Wellbeing. The third cycle of the survey comes in 6 different languages, namely, Arabic, English, Bengali, Hindi, Tagalog, and Telugu, in an effort to get all parts of society to participate and share their views and suggestions on potential enhancements and developments.

Dr. Mugheer Khamis Al Khaili, Chairman of DCD, said that conducting the ‘Quality of Life’ survey is in line with the Department’s vision and strategy to develop a clear roadmap to enhance quality of life in Abu Dhabi as it provides an overview of the issues and challenges facing society. He also noted that these efforts are part of DCD’s role to address the needs of the social sector and improve its services in accordance with government directives to raise ‘happiness’ levels and satisfaction among the emirate’s citizens and residents by ensuring that community members enjoy a good standard of living.

Al Khaili further affirmed that DCD is committed to helping to define social priorities through surveys and studies and collaborate with other authorities to devise initiatives and programmes aimed at improving quality of life and wellbeing in Abu Dhabi.

The Quality of Life (QOL) is an international concept adopted by the Organisation for Economic Co-operation and Development (OECD) to analyse and monitor the wellbeing of individuals and the factors that can affect it. The DCD has further expanded the model used by the OECD to evaluate QOL by adding two effective modules which are ‘Social Connections’ and ‘Social and Community Services.’ The DCD announced that more than 188,000 participated from citizens and residents in Abu Dhabi during the first and second round, which 97 percent participated in the survey stated that they feel proud to live in the emirate. Moreover, 96 percent expressed their satisfaction of their safety and security experience, and 84 per cent noted their overall satisfaction rate for the standard of living in the emirate. These results reaffirm the success of the Abu Dhabi government efforts to enhance liveability in the emirate, thanks to its safety and stability.

Under the survey’s 14 modules, the "Personal Safety and Security" module, 96 percent of survey participants agreed that they feel safe and protected in Abu Dhabi. 79 percent also said that they feel secure when using internet for money transactions.

In terms of the "Environment quality" module 92 percent said they are satisfied with the living environment in Abu Dhabi. In addition, the rate of satisfaction with air quality recorded 74 per cent.

Under the "Subjective Well-being" module, the survey reported that 81 percent of citizens are satisfied with their lives, and 84 percent of residents expressed the same. The overall percentage of life satisfaction among the survey sample scored 83.5 percent.

On the other hand, the "Social Cohesion and Culture" module revealed that 80 percent of participants are familiar with the Emirati culture and heritage. As for the "Social and Community Services" module, 70 percent expressed their satisfaction with the social sector’s services in the emirate.

The "Digital Well-being" module also revealed positive results as 73 percent of respondents confirmed that they can easily obtain reliable information about local laws and legislations. Accordingly, 85 percent stated that they have internet access in their homes. In terms of preferred communication channels to obtain information on social issues, 71 percent chose websites, and 47 percent selected social networking sites, while 43 percent prefer to get information through smart phone applications.

Under the "Housing" indicator revealed that 68 percent of respondents are satisfied with their current place of residence in Abu Dhabi, compared to 13 percent who expressed their dissatisfaction.

The results related to the "Health" module showed that 67 percent of respondents practice some sports. Walking exercises were recorded as the most common at 76.5 percent, followed by jogging at 43.5 percent and swimming at 15 percent. When asked about reasons for feeling stressed, respondents attributed it to financial burdens, workload and job responsibilities, job insecurity, family challenges and workplace relationships.

The "Civic Engagement and Governance" module marked that 63 percent of the survey sample did not participate in any kind of social activities or volunteer work in Abu Dhabi. However, the survey participants expressed their confidence in the emirate’s government authorities. Abu Dhabi police obtained the highest level of trust, followed by the health system and then the courts.

Concerning "Work-Life Balance" 60 percent of respondents work in full-time jobs. The findings also showed that 80 per cent of Abu Dhabi employees take an average of 20 minutes to commute to their workplace. Moreover, the sample’s average sleep rate is less than seven hours per day.

The Department reaffirmed that all submitted data shall remain confidential and only be used for research purposes and assist in arriving at the best indicators that will help improve the whole society’s quality of life of. The Department also urges everyone to participate in the survey available at the following link: https://q-addcd.ink/35hjxEb