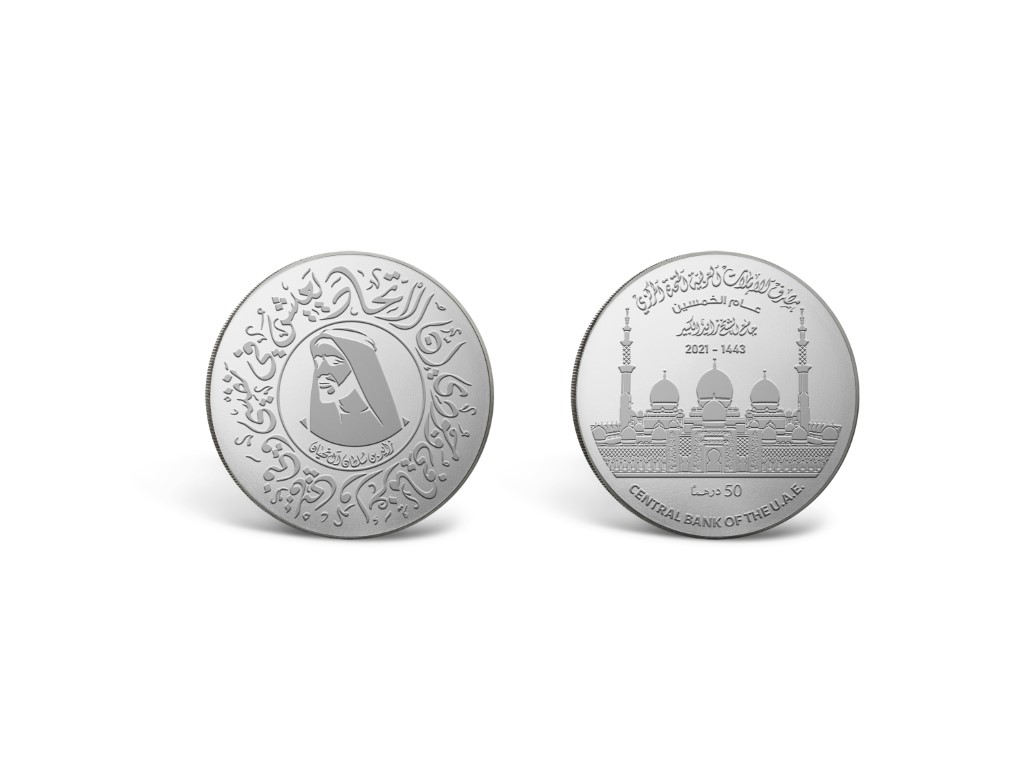 ABU DHABI, 2nd February, 2022 (WAM) -- Under the directives of H.H. Sheikh Mansour bin Zayed Al Nahyan, Deputy Prime Minister and Minister of Presidential Affairs, and Chairman of the Board of Directors of the Central Bank of the UAE (CBUAE), the Central Bank in collaboration with the Sheikh Zayed Grand Mosque Centre (SZGMC), affiliated to the Ministry of Presidential Affairs, has issued 1,971 silver commemorative coins for the Centre.

The issuance of this commemorative coin aims to showcase Sheikh Zayed Grand Mosque, named after the late Sheikh Zayed bin Sultan Al Nahyan. A religious, national, and cultural iconic landmark, mirroring the United Arab Emirates' identity, that has also become a renowned global destination, further consolidating the founding father's vision for the mosque to become a platform for cultural dialogue, tolerance, and coexistence amongst different faiths in the UAE, that hosts more than 200 nationalities living in harmony and peace.

Each coin weighs 40 grams, with the front side of the coin shows a portrait of the late Sheikh Zayed bin Sultan Al Nahyan, with his immortal saying, "The union lives in my soul, in my heart, and it is the dearest to my heart." The reverse side of the coin comprises a drawing of Sheikh Zayed Grand Mosque and the 'the year of the 50th', coinciding with the 50th anniversary of the union.

The new commemorative coins will be handed to the SZGMC. They will be made available for sale, by the Centre, to all members of the society at Souq Al Jami’ via "Etihad Modern Art Gallery". The Coins will not be available for purchase at the CBUAE headquarters and its branches.

Abdul Rahman Al Owais, Chairman of the Board of Trustees of Sheikh Zayed Grand Mosque Centre, said, " By issuing this commemorative coin, SZGMC seeks to honour the late Sheikh Zayed bin Sultan Al Nahyan's timeless legacy, values, and accomplishments that have touched the hearts of citizens and residents, and led the UAE to reach historic milestones and achieve global recognition in various fields."

Khaled Mohammed Balama, Governor of the Central Bank of the UAE, said, "The issuance of these coins embodies the forward-looking vision of the late Sheikh Zayed bin Sultan Al Nahyan that led to the creation of Sheikh Zayed Grand Mosque, one of the World’s splendid landmarks, an international cultural platform, and a beacon of cultural exchange that promotes the values of tolerance. The issuance of the coin coincided with the celebrations of the fiftieth anniversary of the founding of the United Arab Emirates."