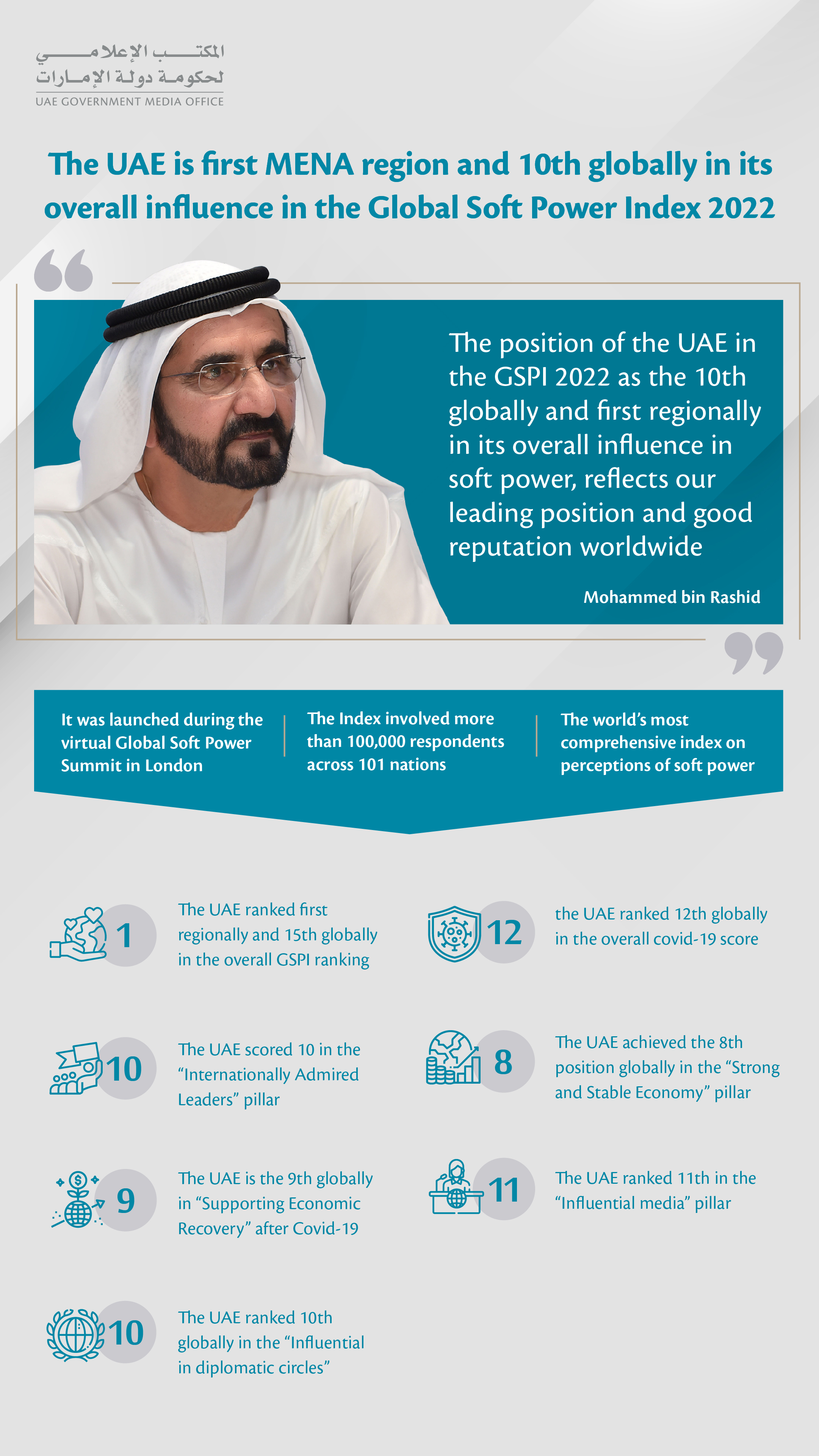 The UAE advanced to 15th place globally in the overall GSPI ranking, up from last year's 17th in the GSPI 2021. The country sits at the top in the region and remains at the forefront of the countries in the Middle East and North Africa, achieving progress in all indicators and sub-indicators.

In a tweet posted on his official Twitter account, His Highness Sheikh Mohammed bin Rashid Al Maktoum, Vice President, Prime Minister and Ruler of Dubai, said, "The GSPI 2022, ranked the UAE as the 10th globally and first regionally in its overall influence in soft power. This reflects our leading position and good reputation worldwide."

His Highness added, "More than 100,000 respondents worldwide chose the UAE as the first regionally and 15th globally in the Global Soft Power Index 2022. Our country also ranked 10th globally in its influence, enhancing our status and positive impact."

Sheikh Mohammed stressed that the country's progress in all indicators and sub-indicators results from the unique model it provides.

H.H. noted, "The UAE's soft power lies in its development model, which brings together the best ideas and minds across the world and gathers people of all races to build the best development experience in the world."

The UAE continued its progress in the GSPI 2022, developed by "Brand Finance" British company. The index interviewed more than 100,000 people from 101 countries worldwide to assess the various axes of soft power and its positive influence. The UAE's overall Soft Power score improved more than 11 percent, progressing to 15th place globally, up from 17th place in 2021.

The UAE's performance in the 2022 Index that included 120 countries had many core strengths, including its distinguished position as a leading destination for Business and Trade, the ease to do business within a stable economic environment.

Also, the country has a positive impact as the most influential in the region and its reputation as one of the most generous and helpful countries internationally. The UAE has improved its reputation among developed nations during the past year.

The UAE's performance on the "International Relations" pillar has shown genuine improvement, as it ranked 11th up from last year's 16th ranking, showing a strong reputation for being "Influential in diplomatic circles" and "Helpful to other countries in need". The country's improving perceptions regarding environmental protection could move UAE into the top 10 in the future.

The UAE is perceived to have managed the pandemic of COVID-19 effectively, which made it a distinguished model regionally and globally. The country succeeded in facing challenges in a balanced way through its proactive policies and procedures.

The UAE ranked 10th globally in the overall influence, while the nine countries that preceded the UAE are among the countries with a large population density. Many countries in the region have advanced in the "Influence" pillar, while the UAE remains at the forefront regionally. The progress achieved by countries in this pillar came in the developing markets of the Middle East and Asia.

Due to its developed strong educational system over the past years, the UAE achieved score improvements across the "Education & Science" pillar, ranking 17th in 2022.