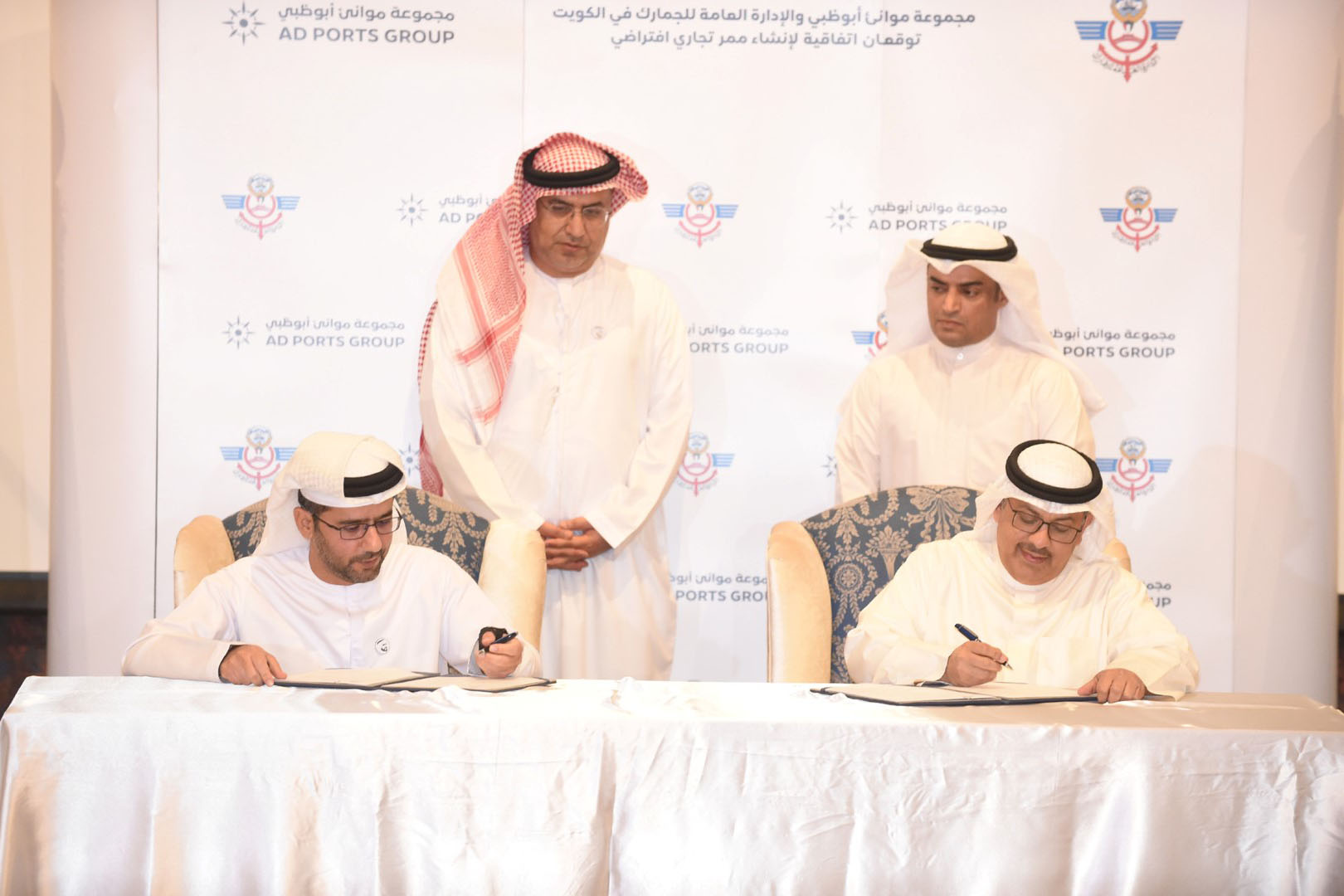 ABU DHABI, 27th March, 2022 (WAM) -- AD Ports Group today announced the signing of a Memorandum of Understand (MoU) with the Kuwait General Administration of Customs to establish a new virtual trade corridor between the UAE and Kuwait, under the supervision of Department of Economic Development – Abu Dhabi (ADDED).

The signing took place in Kuwait following a visit by DED’s Logistics Committee, under the patronage of Abdulwahab Al Rushaid, Minister of Finance and Minister of State for Economic Affairs and Investments - Kuwait and in presence of Dr. Matar Hamed Al Neyadi, UAE Ambassador to Kuwait. The MoU was signed by Capt. Mohamed Juma Al Shamisi, Managing Director and Group CEO of AD Ports Group, and Suleiman Abdul Aziz Al Fahd, Director of the General Administration of Customs - Kuwait.

Under the MoU, Maqta Gateway, AD Ports Group’s digital arm, will develop the new virtual trade corridor based upon its Advanced Trade & Logistics Platform (ATLP), under the supervision of ADDED, establishing new policies, procedures and systems integrations to support a virtual trade corridor that will further simplify and facilitate cross-border trade.

With the establishment of the new virtual trade corridor and implementation of integrated solutions, customs authorities in both countries will be able to access pre-arrival information for international cargo movements, making cross-validation of information significantly faster and promoting pre-clearance of goods.

The MoU will also provide for accelerated procedures for expediting shipments of perishable goods, reducing dwell time at borders.

The digital integration also has significant safety and security benefits, improving visibility for authorities over any possible risks associated with goods that move between the two nations, as well as reducing the inspection rate and simplifying procedures for authorisation holders.

Dr. Al Neyadi said, "The UAE and Kuwait have a vast cooperation opportunity as they both have exceptionally promising markets. We are confident that the cooperation between AD Ports Group and Kuwait General Administration of Customs to establish the first virtual trade corridor between the UAE and Kuwait, will enhance trade exchange between the two countries, and will support their efforts in achieving digital transformation goals, streamlining shipping procedures to reduce transportation and shipping costs, as well as expanding economic cooperation, facilitating the development of the supply chains, and encouraging business investment, by building on the best digital solutions and logistics services provided by the virtual trade corridor."

Rashid Abdul Karim Al Balooshi, ADDED Under-Secretary and Chairman of the Higher Committee of Logistics Development, said, "This MoU sets the stage for deeper cooperation with our trade partners. By establishing this virtual trade corridor, we will generate positive impact on the UAE and Kuwaiti economies and support the wider efforts of our wise leadership to promote trade and fraternal bonds between our nations, establishing Abu Dhabi as a leading trade and logistics hub in the region."

For his part, Al Fahd said, "We are pleased to sign the MoU with AD Ports Group, which comes within the framework of our strategic plan to develop the capabilities of the customs ecosystem in Kuwait with the aim of facilitating business, reducing manual reviews for completion of administrative and customs procedures, and facilitating the trade community in both countries through an agreement that benefits from the advantages of Global Logistics Passport."

"Since its founding, Maqta Gateway has committed its efforts towards advancing the digitalisation of the region’s trade, logistics, and industrial landscape through the implementation of novel solutions that are transforming industry.

"By digitalising clearance and shipment delivery through this virtual trade corridor, we will be able to deliver real benefits for importers and exporters in Kuwait and the UAE, while simultaneously enhancing security and realising new levels of efficiency."

The long-standing bilateral trade ties enjoyed between the two GCC countries in recent years has seen the rapid growth of several key commodity markets. In 2021, the UAE imported more than two million tonnes of petroleum oil products valued at an estimated AED3.79 billion from Kuwait, as well as 143,408 tonnes of petroleum coke and tar valued at AED213 million.

During the same period, the State of Kuwait imported over 18.94 million tonnes of pebbles and stones for use in construction from Abu Dhabi, valued at AED650 million. It also imported 16 and 18 tonnes of gold and jewellery that were valued at AED3.16 billion and AED2.8 billion, respectively.