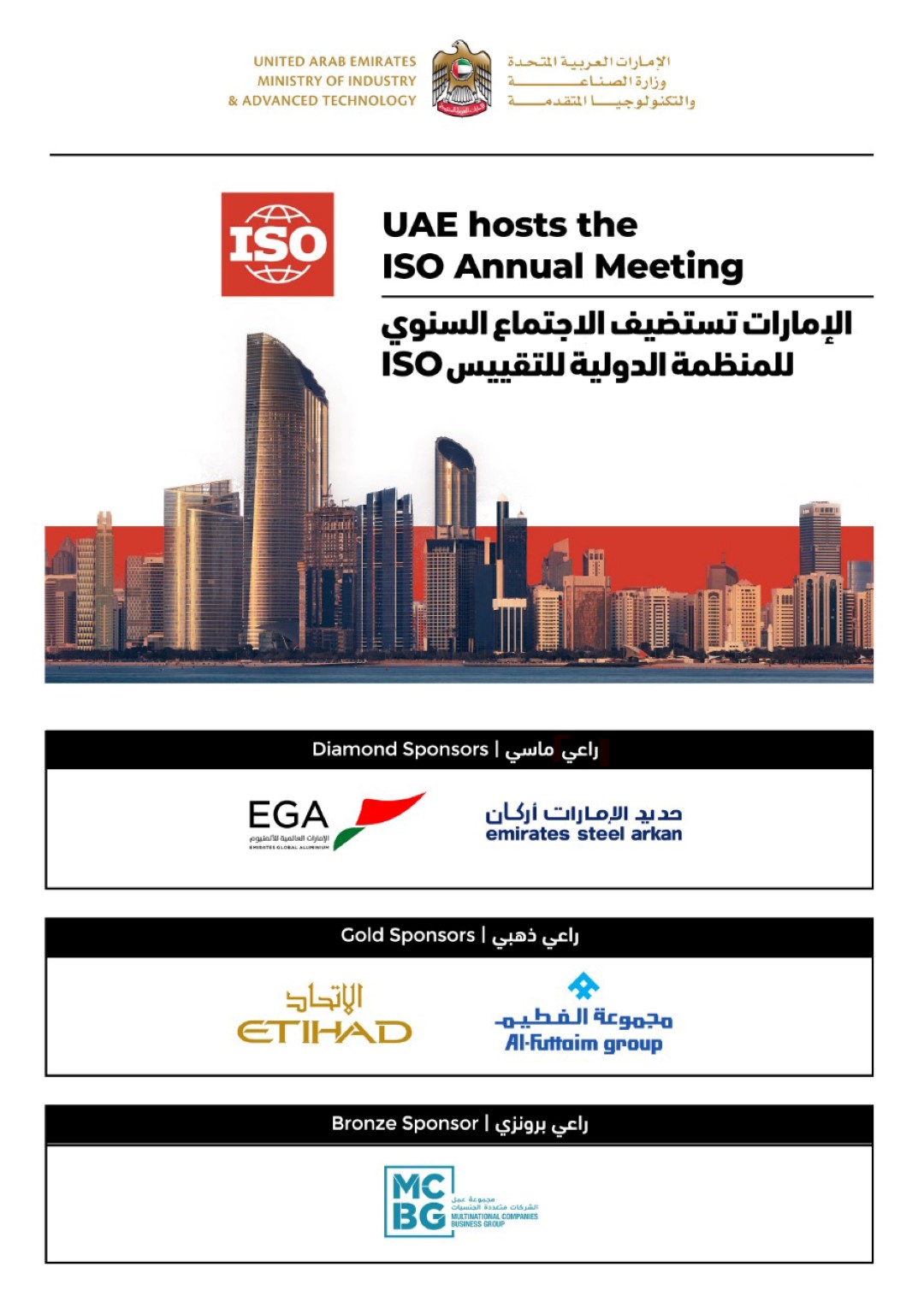 ABU DHABI, 13th September, 2022 (WAM) -- The UAE is set to host the Annual Meeting of the International Organisation for Standardisation (ISO) 2022 at the ADNOC Business Centre in Abu Dhabi from 19th to 23rd September, 2022.

Organised by the Ministry of Industry and Advanced Technology (MoIAT), the event will take place in the presence of Ulrika Francke, President of the ISO, along with more than 2,000 delegates, including officials and representatives of national standardisation bodies, as well as experts and technicians from 163 countries participating in-person or virtually.

UAE’s position in the field of standardisation

Holding the meeting in the UAE for the second time reaffirms the country’s support for and application of best practices in standardisation and its alignment with international standards. The UAE won the bid to host the meeting following the ISO’s 2019 Annual Meeting in Cape Town, South Africa, where the UAE received 64 votes and Denmark received 44. The outcome of the vote reflects the UAE’s leading global role in the field of standardisation and the ISO members’ confidence in MoIAT’s ability to host this meeting. It also highlights the UAE’s efforts to complement international standards to strengthen the industrial sector, support global competitiveness indices, and enhance development goals through advanced and sustainable quality infrastructure.

The Make it in the Emirates campaign supports national efforts to enhance the competitiveness of local products regionally and internationally and meet the requirements of the business sector and consumers in terms of products and services, in line with the nation’s efforts to boost bilateral trade as part of its bilateral agreements with countries around the world.

MoIAT represents the UAE in the ISO as it is responsible for issuing standards and technical and metrological regulations through technical committees and expert taskforces.

The UAE highly values its quality infrastructure. The country has finalised around 27,000 standards and technical regulations across areas related to the industry, advanced technology and future industries, alongside other sectors, including healthcare, education, construction, food, agriculture, and management systems, among other dynamic sectors that shape the future.

MoIAT focuses on enhancing national quality infrastructure and aims to protect consumers and the environment while supporting the economy. It also prioritises facilitating trade and technology exchanges by aligning national standards with global best practices.

To support its work in standardisation, MoIAT collaborates with the industrial, commercial, and service sectors, R&D and educational institutions, and government entities. MoIAT supports sustainable industrial policies that reduce resource consumption by enhancing the quality of infrastructure. It also supports climate action and net-zero efforts by increasing the efficiency and sustainability of production cycles and supply chains while promoting the adoption of 4IR technologies across the industrial sector.

Headquartered in Geneva, Switzerland, the ISO comprises 167 member countries and more than 340 technical committees. The ISO connects the public and private sectors to advance the quality infrastructure ecosystem, with representatives from 123 members and 31 observer countries participating in its annual meeting. As well as convening international officials and experts physically and virtually, the ISO Annual Meeting will witness the signing of several MoUs between MoIAT and various regional and global standardisation institutions.