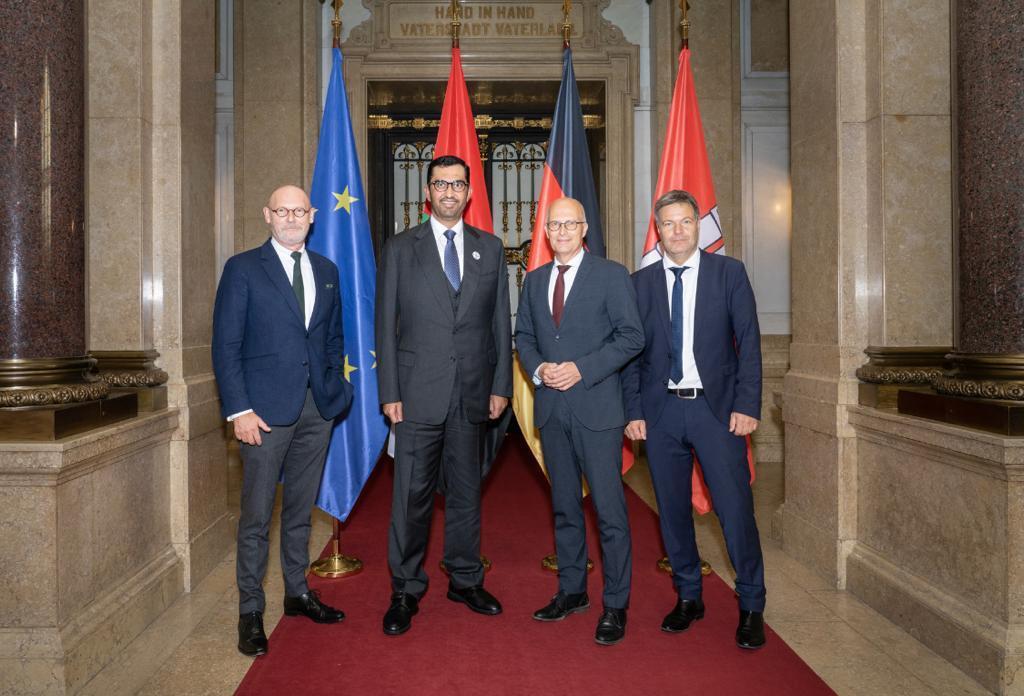 ABU DHABI, 21st October, 2022 (WAM) -- To mark the arrival of the first-ever hydrogen-based ammonia test cargo from the UAE to Germany, Dr. Sultan bin Ahmed Al Jaber, Minister of Industry and Advanced Technology and UAE Special Envoy for Climate Change, along with Dr. Robert Habeck, German Vice Chancellor and Federal Minister for Economy and Climate Action, today will attend a ceremonial event in the headquarters of Aurubis AG (Aurubis) in Hamburg, Germany.

The test delivery from the UAE is an important step in the establishment of a comprehensive hydrogen value chain between the UAE and Germany. Further ammonia test cargoes are due to arrive in Germany later this year and will play an important role in building a future hydrogen supply chain between both countries.

Dr. Al Jaber and Vice Chancellor Dr. Habeck also agreed to accelerate joint energy and industry projects during a Business Roundtable held in the Hamburg Chamber of Commerce and attended by CEOs of leading energy and industrial companies from the UAE and Germany. The roundtable meeting builds on the Energy Security and Industry Accelerator (ESIA) agreement, signed in Abu Dhabi on 25th September.

During the Business Roundtable, Dr. Al Jaber reiterated that the UAE and ADNOC stand ready to partner with German industry and businesses on energy security, decarbonisation and climate action, while noting the UAE is a highly attractive destination for German companies to grow their global markets by leveraging the secure, reliable, competitive and low carbon energy available locally.

Commenting on the inauguration, Dr. Al Jaber said, “I am delighted to be in Hamburg today, as we inaugurate the first ammonia test-cargo between the UAE and Germany. Our rapidly growing energy and industry partnership, underpinned by the strategic ESIA agreement, demonstrates how the UAE is taking pragmatic and tangible action to respond to global energy challenges.

“As the responsible provider and reliable exporter of low-carbon energy, the UAE is fully committed to strategically work with German businesses on industrial growth opportunities, energy security, decarbonisation and climate action. As the UAE prepares to host COP28 in 2023, the UAE extends an open invitation to German businesses to work on pragmatic and commercially viable solutions to advance climate progress and the energy transition.”

As part of the ESIA, ADNOC and Masdar have been identified as the partners of choice to work towards decarbonising Germany's hard-to-abate industry through hydrogen infrastructure opportunities including strategic storage.

In addition to delivering low-carbon ammonia demonstration cargos to Germany, ADNOC recently entered into a supply deal with RWE for a commissioning cargo of LNG for its first floating terminal at Brunsbüttel, Germany, scheduled to arrive in December 2022. ADNOC also announced that it is reserving further LNG cargoes for German customers in 2023 and is allocating up to 250,000 tonnes of diesel per month to support Germany’s energy security in 2023.

Meanwhile, Masdar, the UAE’s renewable energy champion, is actively exploring opportunities in the offshore wind markets in the North Sea and Baltic Sea that could generate up to 10GW of renewable energy production capacity by 2030 subject to the necessary German policy and regulatory requirements being met between the two nations.

There are also plans to collaborate with H2-Global, a key funding mechanism to accelerate the bilateral and global expansion of the hydrogen economy.